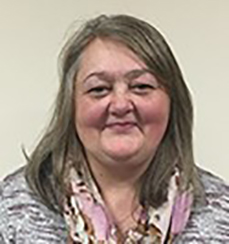 My name is Christina MacIver and I’m one of the trustees of WICCI. I live in Point with my husband and our two children who are aged 19 and 23. I’ve lived in Point for almost 27 years and work as a Learning Support assistant in Sgoil an Rubha.

I’ve been involved with the local Macmillan Cancer Support fundraising group for 10 years, the last 5 years as Chair. I thoroughly enjoy volunteering with Macmillan, I’ve met some lovely people and been to so many great events over the years, organised by the committee and other groups and organisations. The support MacMillan has in the islands is huge and we are so appreciative of that support. I’m proud to be a part of a great committee who were recognised by Macmillan as Committee of the Year in 2014 as we’ve raised over £1 million in over 40 years.

I joined the committee after seeing the support our MacMillan nurse gave us as a family in the months before my father passed away.

During fundraising events we would be approached by people who would tell us the difficulties of being away from home during their cancer treatment, mainly the expense of being off island for days, weeks and in some instances, months. With this in mind we approached MacMillan to see what could be done. Although this process took a few years,  I am so delighted that we are at the point of receiving applications and helping people ease the financial burden of their cancer journey.

Your ticket for the: Christina MacIver