“My husband was ill for almost three years and by the end I thought of our Macmillan Nurse not just as a nurse, but as a friend,” said Macmillan Cancer Support Isle of Lewis Committee member Margaret Eaves. 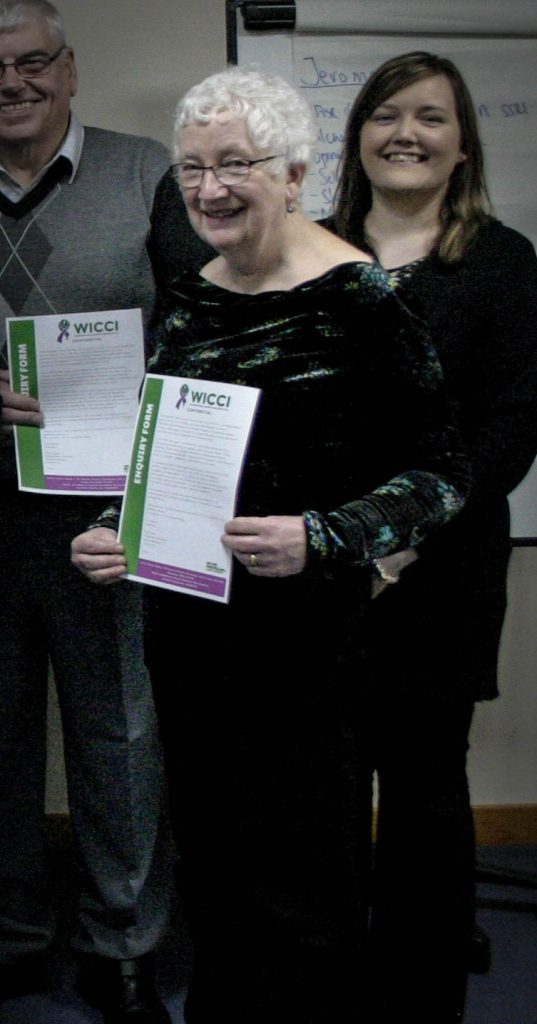 Margaret was first introduced to the work of Macmillan Nurses when her late husband Bob, former Chief Librarian in Stornoway, was diagnosed with cancer nearly ten years ago.

And the dedication, support, empathy and advice received throughout Bob’s illness – and in turn her son David’s subsequent cancer diagnosis – led Margaret to join the local Committee to raise funds and awareness of a service that she says ‘is way more than what you first think’.

Margaret and Bob first met Donna, their Macmillan Nurse, at the appointment where the cancer diagnosis was delivered.

“Seeing a Macmillan Nurse there Bob immediately thought the worst,” said Margaret. “But Macmillan Nurses are there from the very start; and they stay with you right through treatment.

“And from the very start Donna made it clear than she was there for Bob, for the patient, but also for the whole family. She told me that included my sons who lived on the mainland, and I was to pass her number onto them should they feel they needed to call and speak with her.

And they did.” she continued.“She gave us loads of ideas, advice, emotional support, a sympathetic ear. On Oncology Clinic Day at the hospital, the Macmillan Nurses are there and Donna would come into our appointments with us.“She knew then what was being said about Bob’s progress, she would talk to us afterwards, made sure we understood everything and explain anything that we didn’t.

For us, it was wonderful to know she was there should we need her. She was the safety net.”Over the course of Bob’s illness, Margaret often called Donna to ask advice on her husband’s behalf. And, she said, if Donna wasn’t available other members of the local Macmillan Nurse team were on hand, as well as the national helplines, so help was never far away.

Sadly, Bob lost his battle with cancer and passed away seven years ago. Margaret began to find her feet, but four years ago was hit by the bombshell that her elder son, David, had been diagnosed with the same cancer.“That’s when I needed Donna,” she said. “That’s when I phoned her for me.”

Fortunately, David’s cancer was caught early enough to be operable, and he has recovered. Yet Margaret’s story highlights the wide-reach the Macmillan Nurse service offers.

“They have such a wide spread, they’re all over the UK,” she said. “And as well as the local Macmillan Nurses here on the islands, there are telephone and online helplines funded by Macmillan. Macmillan is way more than what you first think.

The support continues long after the immediate need of services – and for Margaret, inspired her to get up, get out and get on with her life following Bob’s death.“I was beginning to pick up the pieces and get myself into a new way of life when I came across an article about Macmillan Cancer Support in Lewis who were looking for extra help,” she explained.

“I didn’t phone straight away, but eventually I got in touch and started selling Christmas Cards. I got more and more involved and have now been on the Committee for about four years.“For me, joining and helping out is my way of saying Thank You,” Margaret continued.“As well as being grateful to the team in Stornoway, I’m grateful to the Macmillan Nurse team at Raigmore who helped when Bob was getting treatment; and I’m grateful to the Macmillan Nurses in Leeds where David lives who helped him.“Being involved with Macmillan Cancer Support has given me a sense of purpose in life and that I’m doing something worthwhile to help other people.“It’s also let me meet a great bunch of people that I wouldn’t have got to know otherwise.”

Members assist at the Hebridean Celtic Festival, attending to the needs of those on the disabled viewing platform; as well as the annual Hebridean Rally, organised by Lewis Car Club and run in aid of Macmillan Cancer Support.And the work of the Lewis Committee, which was established over 40 years ago and has raised over £1million, was recognised nationally in 2014 when they were chosen from more than 650 other groups to receive the Macmillan Committee of the Year Award.

“We get a lot of support on the islands as I think we have such close communities here that a lot of people are affected by one person’s diagnosis,” Margaret said.“People are very, very generous and it can be quite humbling – people will tell you their stories, and it can get emotional, but I think you also find support in that.”

And paying tribute to the local Macmillan Nurses, along with those dedicated to helping others throughout the UK, Margaret added: “You have to be a special person to be a Macmillan Nurse. I think you must get closer to your patients than you would as a ward nurse say, and you must know that not all of your patients will make it.“If they hadn’t been there for me I would have been much more of a wreck and I can’t speak highly enough of them. They are wonderful, caring people. They’re the safety net.”

To find out more about Macmillan Nurses and the services available, please visit www.macmillan.org.uk. And you can find out more about the Macmillan Cancer Support – Isle of Lewis Committee via their Facebook page, or contact Secretary Mabel MacLeay on 01851 705182 / 07787363961 or Chair Christina Maciver on 07789021804.

Your ticket for the: Margaret’s Story